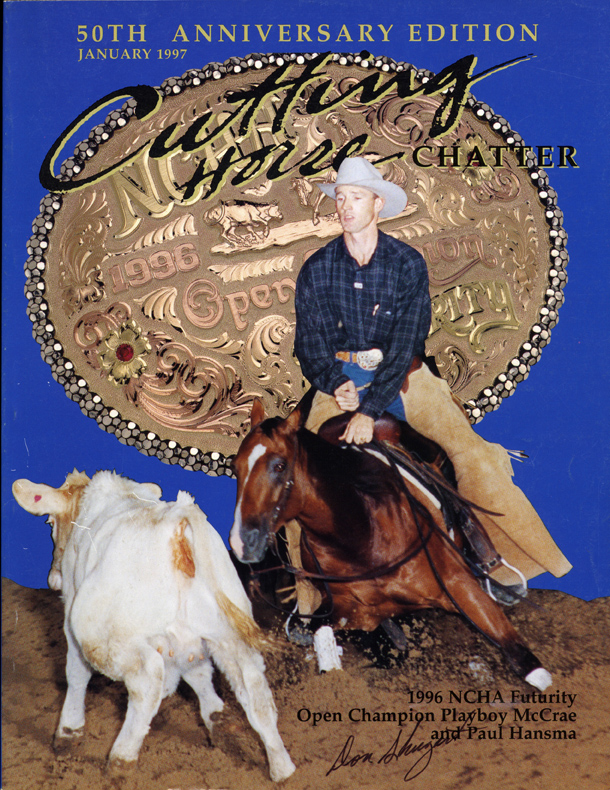 Playboy McCrae was out of Playboys Madera, whose sire, Freckles Playboy, reserve champion of the 1976 NCHA Futurity, was also owned by Kay Floyd. Playboys Madera, a leading earner of $409,761, had carried Kay to win the 1988 NCHA Non-Pro World championship.

“A lot of people who know Madera say that Gus (Playboy McCrae) works the same,” said Floyd. “He’s a big stopper like she was and he is really neat to be around.”

Floyd had also shown Playboy McCrae through the NCHA Futurity Non-Pro Semi-Finals. “He got a little lethargic for Kay in the Semi-Finals,” said Hansma. “But when I worked him afterwards, he came back and tried hard for me.”

Cutting next-to-last in the Open finals, Paul Hansma tossed his hat in the air, before his winning score of 223 points flashed across the scoreboard. “I didn’t know what they would score me, but the cows were good and I felt in control the whole time. The crowd loved it and I knew we had a good run.”

Lloyd Cox, the leader with 219.5 points on Royal Serena Belle, before Playboy McCrae’s winning performance, was pleased with second place. “I had a good run, but the cattle were tough,” said Cox. “I was surprised that the 219.5 held up as long as it did. Paul had a great run. Mine was definitely second to his and I was glad for him.”