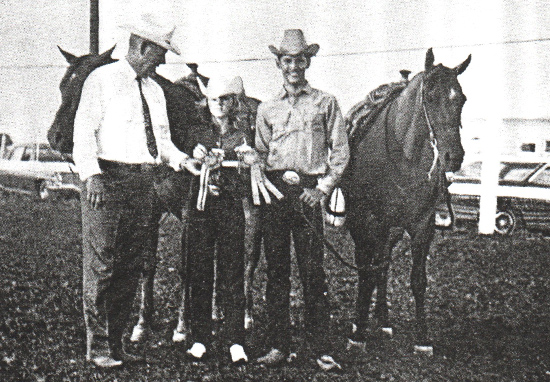 It was an event that heralded little attention, but a 10-entry cutting, held on August 21, 1965 at the Circle K Stock Farm in Dallas, Texas, marks a pivotal moment in the history of the National Cutting Horse Association.

Sponsored by the North Texas Cutting Horse Association, the first NCHA-approved Youth Cutting featured “six boys and four girls.” Although the ages of contestants are not mentioned in an article from the September 1965 issue of The Cuttin’ Hoss Chatter, it is noted that “of particular interest is the fact that two of the contestants came from as far away as Orange and Houston, Texas.”

Louann Tadlock, Aubrey, Texas, and Rigo D’Ingianna , Houston, Texas, tied for the win (scores were not included in the article). Louann was aboard Captain Joker, the 7-year-old stallion owned and shown by her father, trainer J.D. Tadlock.

Pam Phillips, Frisco, Texas, placed third on Gin Echols, an 11-year-old mare shown by her father, B.F. Phillips, Jr., to win the 1965 and 1966 NCHA Non-Pro World Championship titles, as well as the 1965 NCHA Non-Pro Finals. B.F. Phillips also bred some of Quarter Horse racing’s most famous champions, including two-time world champion Dash For Cash, who is arguably the sport’s most influential sire.

Dash For Cash, foaled in 1973, was trained by C.W. “Bubba” Cascio, who during the early 1960s also trained and showed cutters, including his own horse, Royal Jazzy, winner of the 1963 NCHA World Finals.

NCHA president Marion Flynt was on hand at the Circle K Arena on August 21, 1965 to present trophies and ribbons to the Youth participants, and for a winners photo for the “Chatter” article, which concluded: “Our cutters of tomorrow need this encouragement and we ask all members of NCHA to give their assistance in making this class a part of shows wherever possible.”

By 1973, NCHA youth participation had mushroomed and the first NCHA Youth World Finals included participants from seven states. Today, the Junior and Senior Youth World Finals, along with the Youth Scholarship Cutting draw young cutters from coast-to-coast during the NCHA Summer Spectacular in Fort Worth.

The 2020 NCHA Metallic Cat Summer Cutting Spectacular, scheduled for July 10 through August 1, at Will Rogers Memorial Center, includes go-rounds for the both the Youth World Finals and the Youth Scholarship Cutting, beginning on Monday, July 13, and concluding with finals on Wednesday, July 15.  All Youth World Finals competition will be held in Will Rogers Coliseum, while the first go-round of the Youth Scholarship will be conducted in Watt Arena, with the finals held in the Coliseum.