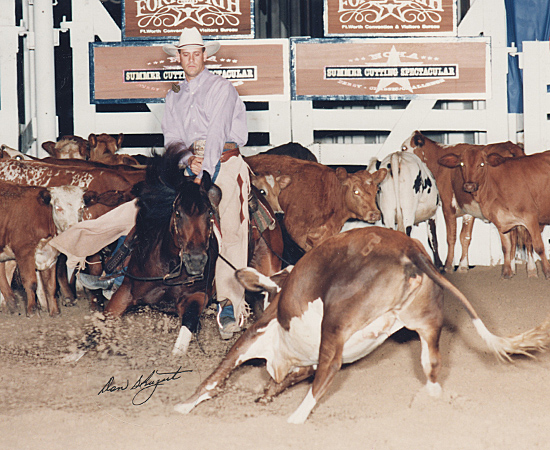 In 1994, non-pro competitor Phil Rapp won both the Open and Non-Pro NCHA Super Stakes championships and achieved a still unmatched accomplishment. No other rider before or since has claimed both championships of a 4-year-old NCHA Triple Crown event in the same year.

Tap O Lena had drawn nineteenth to work in the 21-horse Super Stakes Open finals, where her competition included 1994 Augusta Futurity winner Hicapoo, shown by Paul Hansma for Jim and Mary Jo Milner. Already a leading 4-year-old earner with over $100,000 before the Super Stakes finals, Hicapoo had placed third in the NCHA Futurity and won the Augusta Open Futurity. Following the Super Stakes, where she placed as reserve champion with 222 points, Hicapoo would include the NCHA Derby, the Glen Rose Derby, and the Georgia National among her 1994 wins, and was named 1994 NCHA Horse of the Year. When she retired, she had official NCHA earnings of $446,712.

Tap O Lena’s credentials coming into the Super Stakes included Non-Pro championship wins in the Augusta Futurity and the Chisholm Trail Derby, as well as a ninth place in the Abilene Spectacular Non-Pro. She had also been an NCHA Futurity Open semi-finalist.  Her scores of 218.5 and 216.5 in the go-rounds and 216.5 in the semi-finals of the Super Stakes were on target, and from past experience, Rapp knew he could call on Tap O Lena for more in the finals.

Although their first cow in the finals was not one Rapp had picked, it was in the right place at the right time and turned out to be a good one. With over a minute left after the first cut, Rapp made his second one on a cow he and his helpers had liked. But when they cleared the herd and he dropped his hand, Rapp was faced with a renegade.

“It was all or nothing,” he said. “We were on the verge of disaster. The cow was mad and my mare was running out of air, but my help kept saying to stay hooked, so I just kept kicking.”

The winning score of 225 points was Rapp’s highest mark up to that time. The next year, he and Tap O Lena would win the 1995 NCHA Classic/Challenge Open and Non-Pro championships with matching scores of 228 points, and in 1996, they dominated the NCHA Super Stakes Classic Open and Non-Pro with wins of 226.5 and 223 points, respectively.

“She has all of her mother’s guts and Doc O Lena’s finesse,” said Rapp, who was 15 when he began showing Tap O Lena’s dam. “I was pretty green when I first started showing Tapeppyoka. “I’d get her in binds that I didn’t know you weren’t supposed to get horses into. We learned together, and she was gutty. At some weekend shows, I’d cut her for darned near two minutes.”

When she retired, Tap O Lena would eclipse her impressive show career with an even more impressive one as the wellspring of more champions and record setters. She has produced 11 money earners of $638,380, including Tapt Twice LTE $279,457, by Dual Pep. Tapt Twice is a leading dam of 25 earners of $1.5 million, including cutting’s all-time leading female money earner Dont Look Twice LTE $824,546, the 2011 NCHA Open Horse of the Year, 2012 NCHA Open World Champion, and 2011 NCHA Open Reserve World Champion. In turn, Dont Look Twice, by High Brow Cat, is the dam of 8 earners of $672,783, including Dont Stopp Believin LTE $462,124, winner of the 2015 NCHA Open Super Stakes and 2018 NCHA World Open Reserve Champion.

To read more from Sally Harrison visit her blog at sallyharrison.com