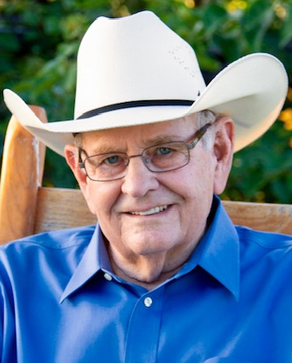 For over four decades, Milt Bradford monitored the pulse of the cutting horse industry through public auctions that saw hundreds of millions of dollars worth of horses change hands, while cutting became the world’s richest Western performance horse sport.

On May 1, 2021, after a long battle with cancer, Milt passed away peacefully at his home in Weatherford, Texas. He was surrounded by the presence of family and friends and the voice of his favorite singer, son Garrett.

Milt spent his life as a “facilitator.” In his family life, he facilitated Mary’s passion for horses. He was her best travel companion and always insured she had a good horse to ride and the best people to help. He facilitated Garrett’s love of hunting and fishing by driving, organizing, getting equipment.  When Garrett discovered his passion as a musician and songwriter, Milt was out of his comfort zone, but encouraged Garrett to surround himself with successful people of that mindset.

In the larger world, Milt was a facilitator as well, for horse sales, real estate sales and later for helping others find a path to their dreams and purposes.

Born April 22, 1950, in Lufkin, Texas, Milt grew up on his grandfather’s East Texas dairy farm, ten miles from Lufkin. Following high school, he worked briefly as a lineman for Texas Power & Light, before meeting Bill Long, a long-time NCHA member. Milt worked for Bill in Madisonville, Texas, and eventually moved to California to work in Bill Long’s electrical business there. In 1982, Milt moved back to Lufkin and went to work for Raymond Havard, in his horse breeding and auction businesses.

“I was raised around cattle all my life and never wanted to do anything unless it had something to do with horses or cows,” Bradford explained. “I worked for Raymond Havard for ten or twelve years, and worked as a bid spotter at (livestock) sales throughout the country.

Milt met his wife of 34 years, Mary, in Lufkin, Texas, at a cutting horse show he was producing and where she was showing. They were married on November 29, 1986, in Stephenville, Texas.

In 1990, Milt collaborated with Dan Lufkin and Lindy Burch, of Oxbow Ranch, to produce the first Will Rogers Preferred Breeders Sale. That sale set the course for Milt’s next ten years of producing horse sales as Milt Bradford Productions.

An early proponent of cloning technology in the equine and cattle industries, Bradford was also renowned in the rodeo industry and received worldwide notice in the media, when he obtained five clones of his 1999 PRCA Bucking Bull of the Year, Yellow Jacket.

Milt, who had never shown a cutting horse before he met Mary, won the 1988 NCHA Challenge Non-Pro Limited championship on Doc Lust Bar, and also showed Glamorous Dually to win the 2002 NCHA Super Stakes Classic Amateur championship, before business demands took precedence over riding and he hung up his spurs.

In 2000, Milt entered a partnership to form Western Bloodstock, producer of the renowned National Cutting Horse Association Sales in Fort Worth, as well as landmark sales such as the Rock Creek Ranch Dispersal, the Marvine Ranch Reduction Sale, and Walton’s Rocking W Ranch Dispersal, among others.

In 2013, nearing the time that retirement beckons many who have enjoyed a fast-paced business life, Bradford and his partner, the late Ben Emison, who passed away in 2019, sold Western Bloodstock to its present owners, Jeremy and Candace Barwick.

“Milt has been a great friend and mentor,” said Jeremy Barwick. “He has always been there for me, when I needed advice on a sale, or just life in general.

“I am extremely blessed to have had Milt and Ben in my corner since I purchased Western Bloodstock from them. Milt always sent me encouraging texts before and after each sale and supported me the entire time. He will be terribly missed by so many, and it is my honor to carry on the legacy of Western Bloodstock, including the Preferred Breeders Sale sessions started by Milt and Mary in 1990.”

It did not take long for Milt to realize he was not the retiring type, and after dabbling in the cattle business, he found his niche in the real estate business where, realizing the value of surrounding himself with good people, he teamed up with good friend, Don Bell.

Milt was still elbow deep in property transactions the last week of his life.